We sailed across a very cold, still sea in sunlight – a meld of chrome and the quicksilver at the back of a mirror, leaving behind a wake of slowed-down time. We approached the glacier at the end of the fjord as if from a great distance, slowly, respectfully, like pilgrims finally achieving their icy destination. The waters began to change, losing their tranquil reflections, collecting more and more fragments of ice with the telltale blue glacial hue. Gulls watched us from perches of glassy fragments, and an occasional seal popped up like a well-fed, shortsighted, scientifically-minded gentleman lacking monocle and pince-nez to make us out clearly.
We stopped for lunch at a circumspect distance from the fabled beast of the glacier. Now, some have gone ashore to walk up its flank, while the rest of us stay lazily onboard, claiming blogs to write, projects to sketch, climate change to contend with; meanwhile, Ted very slowly steers the Noorderlicht towards the glacier – in fact there seem to be several glaciers meeting at right angles – and having elbowed aside the crowd of ice-floes to get the best position in the house, we are floating within 100 yards of its vast panoramic façade, maybe fifty meters high, surrounding us like an uneven 180 degree cyclorama of ice. To our amazement, we can hear a colony of gulls cawing and nesting on the high shelves of ice. Otherwise absolute silence; fathoms of emptiness far deeper and more hushed than any cathedral; the kind of silence that feels theatrical – an auditorium in which everything waits for as long as necessary – for the next profound crack deep within the heart of the ancient ice, followed by the thunders and howlings of breaking ice, and the crash of a sacrificed tower falling, falling… Which doesn’t happen today, although we’re all tense in expectation of it, especially being so up-close to this beast in suspended animation.
Looking at the glacier for as long as we do this afternoon is a deeply disorientating experience. It feels too huge to write about. At times it seems almost fake; you might be reminded of a 19th century stage-set for a melodrama about Polar Explorers; it could made of be B-movie foam; or be a top-range Bond set built in a vast film studio under winter lights that don’t shift with the hours of the day (like here): Blofeld’s ultimate Polar hideaway from which to plot his latest dastardly destruction of the world and its corrupt capitals. Perhaps a section of the glacier’s facade will hydraulically tilt, to reveal a vast techno-chamber within, and at the centre of it Blofeld’s latest apocalyptic super-toy being readied for countdown to zero…
But step back, and the monster is staggeringly beautiful. You might think of an unfinished Gaudi cathedral façade, a work still in progress 12.000 years later; time and wind and other unseen hands have fashioned off-kilter spires and cranky stairways and half-glimpsed grottos; there are long, precise, jagged doorways giving no access to the sanctums within; and windows where the crust of snow has been polished off to reveal the pure cobalt depths of the glass chambers beneath. There are patches of striation, and cracks in ice-palace ceilings that will surely fall soon. There are sections that look like fine Murano summerso glass, all in the same blue.
Then again, the whole edifice seems as artfully, unevenly constructed as a Cappadocia underground settlement; or a Yemeni city made not of mud-brick but of snow and ice; or a rock monastery balanced on its abyss; or a super-trendy-architect-designed-high-rise development transported from NYC, with blue office towers and apartment blocks, mezzanines and blurred, ice-filled angular penthouses. And yet it can also look as derelict as the stately ruined Palace of the Snow Queen, transformed by magic mistake into the abode of mad Miss Haversham, with eroded histories of peeling white wall-paper, and plaster dadoes and cornices broken off, and zigzags where backstairs once led, and haunted attic rooms where memory died and time froze to death.
And for all its austere grandeur, this place feels at moments like the absolute dead end of everything, including time; the zero, fuck-all, end of the line. The deep silence, the deathly hue of the ice, and the palpable presence of intense, vast powers struck and stuck here, are magnificent and terrible. There’s no human scale. No wonder Scott’s camera-man, Herbert Ponting, in his famous photo of the Barne Glacier in Antarctica, had to ink in a diminutive polar explorer and sledge to make sense of the gigantic ice-cliff that confronted and confounded him, a little over a century ago, in 1911. Now we are each that little ink figure, in our Rab jackets and bright hats, snapping away, framing and downloading the beast onto our laptops, hoping to capture it, and failing.
It’s good to know this vast frozen beast, born of the last Ice Age, is still here; suddenly it’s strangely comforting to think of it as a world library of snow – for it’s true if fanciful that the snow of the winters of all our lives is somewhere in here, crushed down to ice; so is that which fell during Shakespeare’s winter’s tale, on the ice-fairs on the Thames; and the snow that fell when Breughel’s hunters were returning home; and the snow that fell long before anything human was really here. And now, the warm breath of billions of lives, and the CO2 from stacks of foundries and factories, and worldwide traffic jams, and the collected vapour trails of all the flights that have ever flown, is melting away the monster, little by little. 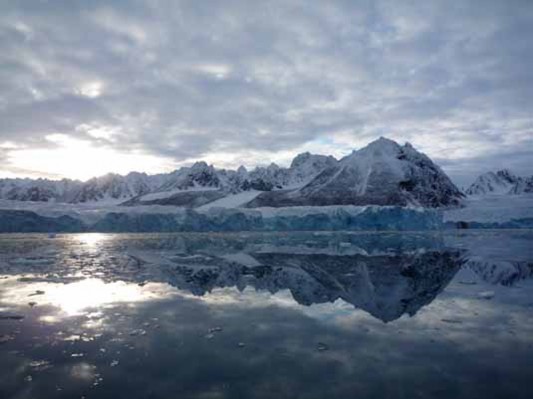 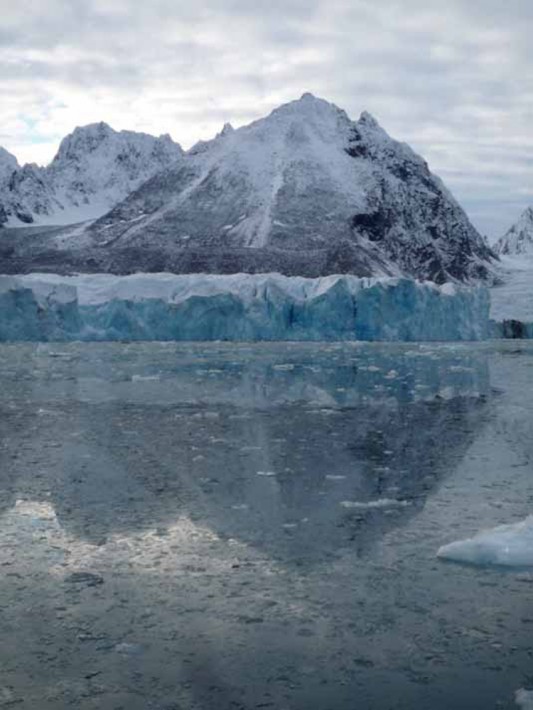 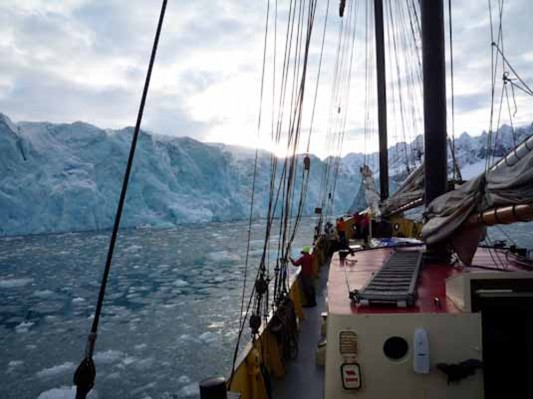 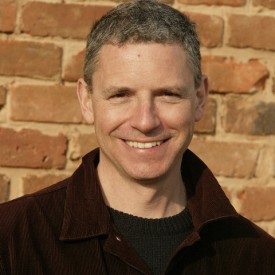