Perceived truth in the Arctic

You come to realize after a few days in the Arctic that it is not the world playing tricks on you, but rather your own perceptions of what is true that deceive you. It turns out that when you stand on top of the world, most of the signals you have learned about how to tell your position in time and space in relation to the sun, are no longer valid.

The arctic defies many “knowns” and is quick to point out that “some rules don’t apply.” It then taunts you to grapple with the bigger picture and bigger rules by which the world and climate really work.
The desolate landscapes, vast wilderness and relative absence of humanity also deceive you into thinking we are far from the problems of the world. And yet chemical fertilizers and PCBs have travelled the atmosphere to poison the polar bears. Carbon dioxide from Chicago, Tokyo and Abidjan collude to warm the fjords we are floating in. And we cant forget these fragile waters are the geopolitical front line for deep sea oil and the Northern Passage. The Arctic may be remote and rarely witnessed, but it is not isolated, or untouched – it is deeply and intrinsically connected to the other side of the globe.
Our daily observations of absent and melting glaciers force us to circumnavigate the “how” these dynamics occur and to consider humanity’s dependence on the integrity of the Arctic. We have had some somber conversations, as we do not yet know what the predicted absence of a polar ice cap will trigger in the climate system and magnitude of effect on agriculture and health of communities across the globe.
The 80th parallel is a privileged perch from which to look at the world and literally back at humanity. But day after day our perceptions and desires for how we want to believe the world is, sometimes start to feel like mirages in the snow.

Rock of optimism
Today we crossed the rock and mud of yet another empty glacial basin. Remnants of another dead glacier, that no longer reaches the sea, and never will again. The fog brought a certain melancholy in this landscape of rubble and rock. But at least here I could see the lichens on the rocks start to turn to moss, which eventually will turn to soil. In a final glance back at this barren plain optimism did grab me. The low sun had burned through the fog and revealed we were towered by a snow-capped granite peak that will someday cast its shadow on a green valley. 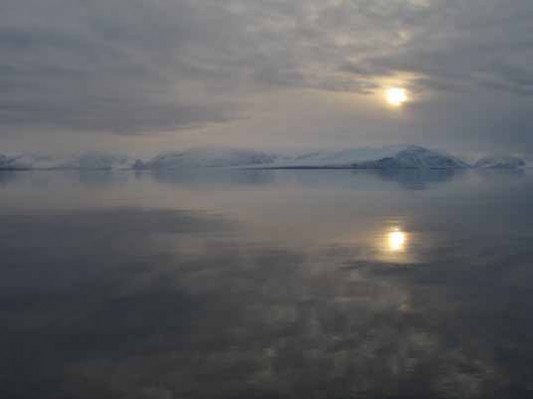 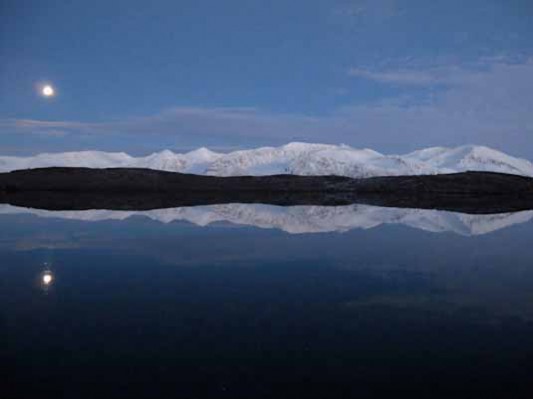 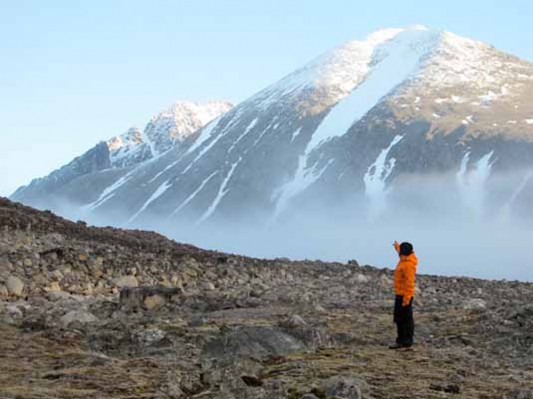 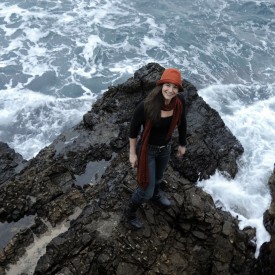 This entry was posted in Crew, Images, Joy Guillemot, Media. Bookmark the permalink.