The science on this year’s Cape Farewell has been split into two (linked) sections. We want to build on previous visits to Svalbard (2003,04 and 07) by repeating a cross section through the West Spitsbergen current (part of the extension of the Gulf Stream) and measuring the East Spitsbergen current for the first time (the other half of that extension in the High Arctic). In addition I am keen to measure the extent of melt water from both the sea ice of the Polar Cap and the glaciers of Svalbard. The other section, covered by Debora, is to investigate the influence of changes in pH of sea water (acid levels) that are occurring as a result of warming seas and increases in atmospheric carbon dioxide.

Previous trips have been hindered by equipment problems – though we have always obtained results – eventually. This year we are working with state of the art equipment with temperature/salinity measurements being made by either the YSI CastAway (a very neat and tiny probe that is so easy to operate even I can do it

) or the slightly more advanced AML Minos, which can profile the water column deeper than the Cast Away. Both have been performing incredibly well and the old cries from inside of “Simon – it seems to have crashed, can we do that 250m cast again please” are memories of a bygone era. The only down side is that I am no longer burning off the three meals a day delivered by Sonia.

We also have the benefit of a new Nortek ADCP – a current meter than uses acoustic pulses to measure the ocean’s flow beneath the boat.

Thus far we have completed 18 stations (samples), with the major offshore sections to be made close to the end of the voyage (when the artists have gained their sea legs). I can see big changes in the landscape since 2004 with my eyes but these are also backed up by the data. The glaciers have all but disappeared close to the coast. In 2004 we observed strong layers of freshwater flowing into the sea due to glacier melt. The source of this intrusion is now drying up and many of the fjords show little input. This isn’t a sign that the glaciers have stopped melting – more that they have no more ice to melt! As we headed north, clear of glacier influence, we encountered extensive loose sea ice, brought south by the strong northerly winds. The strongest fresh water inputs now seem to be coming from this melting sea ice which almost surrounds the north island

Sea ice is relatively fresh. Although originating from the saline ocean, as the ice forms its crystals are of pure water. This rejects the salt (brine) from the ice forming cold, salty and dense water which sinks (and helps drive the deep convection of the Atlantic). As time progresses more and more salt falls out of the sea ice until after a couple of years it is fresh enough to drink. The sign of intense ice melt is a layer of cold fresh water in the middle of the ocean far from land. This is what we are measuring, nearly 20% of the surface 15m.of water is from ice melt, and our data are supported by satellite maps of ice cover. At present the satellite data are telling us that 2010 is likely to become the second lowest ice cover in the Arctic in human history after the lowest in 2007. There is much to be done in this remote wilderness in understanding how our entire planet is changing. 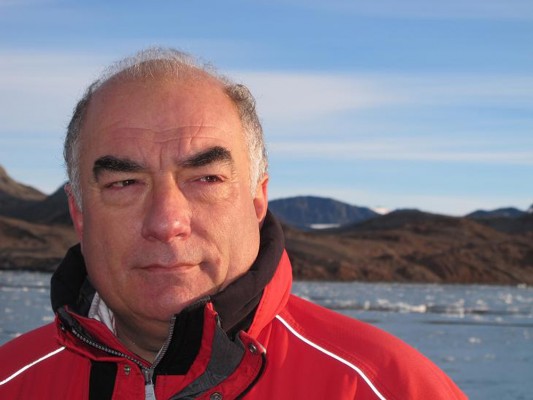 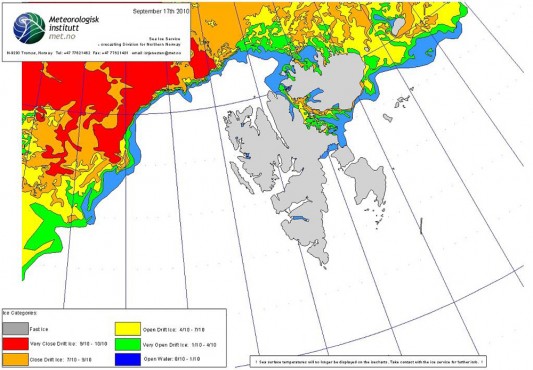