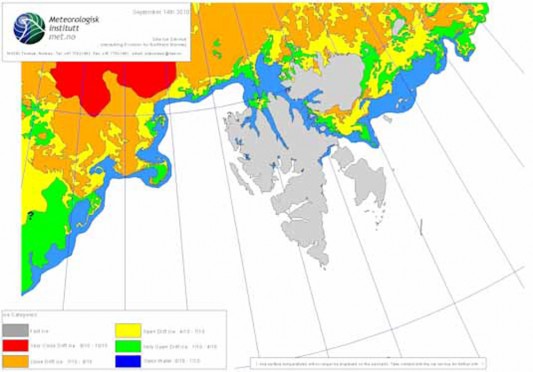 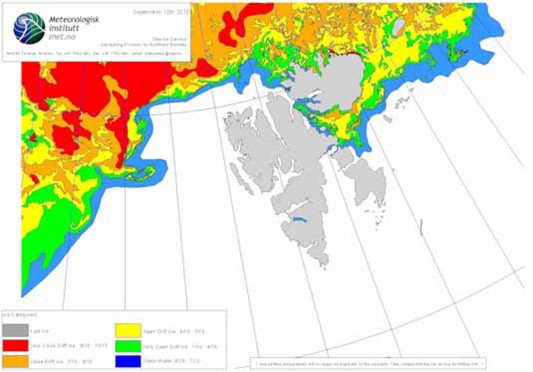 Yesterday (Wednesday) Noorderlicht pulled into the Liefdefjord to the North West corner of Svalbard having abandoned the battle to push through between the two main islands.  The first couple of days at the weekend we were hampered by ice.  It is ironic that both this and the 2007 route plans of Cape Farewell were altered as a result of ice flows when both years represented abnormally low coverage in general in the Arctic.  The ice loosened from the main Arctic ice sheet by warm seas was blown south by strong northerly winds and into the path for the 2007 Greenland crossing and this years main track around the islands.  Hopes were raised as the winds veered to the south pushing the ice flows to the side of the channel, opening up a navigable path (one call out to the coastguard was enough for one trip!).  Unfortunately the winds blew so strongly that whilst the engines took us forward at 6 knots the winds took us backward at 5.  Two days running Bob heroically steered the boat south and two days running we turned back having sent half the team running towards the heads – the force 7 winds proving too strong for both ship and stomach. Having used the Iridium data link to consult weather and ice forecasts for the next few days the plans changed and we headed back to the west to explore this magnificent coastline in more detail.

As we pulled into our night time anchorage in a calm sheltered bay the water was covered in a thin layer of ice, and panic set in in both David’s and my mind .  Sea water freezes in a different way to fresh water and we experienced that in a Greenland Fjord almost to our cost in 2007.  So here is today’s science lesson:

Fresh water freezes at 0 deg C (easy) but its maximum density occurs at 4 deg C (not so easy).  This means that in a pond as it cools from 9 to 8 to 7 deg C at the surface the cooling water is dense and sinks, replaced by warmer water beneath.  However, at 4 deg C as the water cools further (3,2,1), the surface water becomes lighter, and this sinking (or convection) stops.  This means that the cooling layer is trapped and cools rapidly allowing ice to form as soon as the air temperatures hit zero!  The ice builds up slowly from the surface getting thicker the colder the air and the longer the cold spell.  This takes time and there is plenty of time to move a boat out of danger.

Seawater at an average salinity of 35 freezes at -1.91 deg C, but its maximum density is below its freezing point at -2.8 deg C.  This means cooling at the surface causes the cool water to sink and be replaced by the underlying warm water.  This keeps going and at no point does the convection stop until the whole column in the fjord reaches minus 1.91.  This means that sea ice doesn’t readily form but when it does the whole column freezes very quickly.  In 2007 we were in a fjord and measured the Salinity at 35 and temperature as 1.9 from surface to bottom (20m).  The science team at the time (Emily, Carol and myself) warned the skipper who was sceptical. We persuaded him to start heading out and as we did the fjord suddenly started to turn to thick slush.  He gave the Nooderlicht full throttle and just got out in 20 minutes to look back and see the fjord now one solid block of ice – had we remained it would have been Christmas Greenland for us.

The sight of ice in a sea fjord thus worried us and we rapidly deployed the CTD to check the salinity and temperature of our new location – I have plans for Christmas 2010 and they are not in Svalbard! Luckily the depth profile of temperature and salinity (see the image) showed that we were safe.  There was a thin surface layer of about 24 g/kg salinity so the maximum density was above freezing at this point (the water was closer to fresh than salty).  The water at the surface was minus 1, close to freezing at this salinity.  This was surface fresh glacier water mixing with sea water and trapped at the surface.  Below this the temperature was a balmy 3.5 deg C and 34 g/kg, a long way from freezing.   Our vessel would have no problem in pushing out of the thin surface ice layer and it would be some months yet before this fjord was cold enough to freeze so we could sleep soundly. 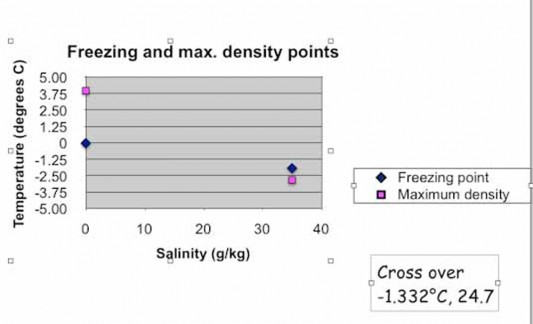 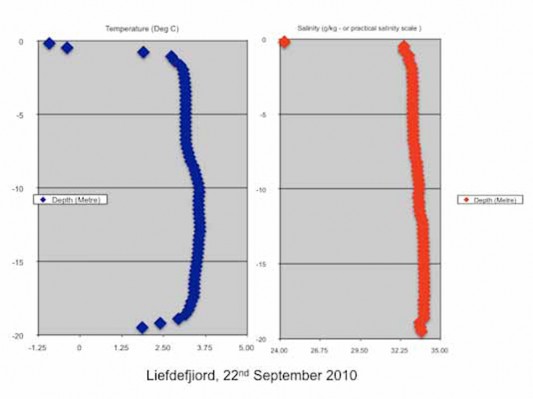