A short blog today with two personal messages.  Good luck to Emily in her first week of University!  Emily joined us on Cape Farewell 2 as a 13 year old and had the experience of her life.  Working with Artists and Scientists for over two weeks split her mind for the next 5 years between art and science.  It wasn’t until the last minute she went down the art route (ah well – her father obviously failed somewhere) and this week starts at Chelsea College studying textiles.  She would notice the huge differences taking place up here over the past 6 years with many of the glaciers and associated icebergs now a memory – sorry Em!

That brings me to my second personal message.  To Henry who celebrates his 10th birthday today – Happy Birthday Henry!  If Henry came to the Arctic on his 13th birthday as Emily did he would, I fear, see even bigger changes.  As we speak the ice from the high North is still flowing past us to its graveyard in the Greenland Sea.  We are stuck in a fjord while I wait for the next ice maps.  Believe it or not the Norwegian Met Office don’t issue maps at weekends so we have been working a bit in the dark over the past two days and looking forward to enlightenment from this essential overview.

I mentioned in an earlier blog that the ice cover is the second lowest in human history after the low of 2007.  There are however reports of ice forming already in some areas indicating an early start to winter.  I have two comments – much of this ice is loose ice drifting from the pole around here.  New ice around Svalbard is as a result of pools of relatively fresh water which we are observing which will form a weak thin ice sheet earlier than normal sea ice, especially with the cold Northerlies we have at present. But it will be weak and will melt rapidly come spring.  The positive thing Henry is you may be amongst the first generation to sail to the North Pole on Noorderlicht.  His skiing lessons may have been to no avail. 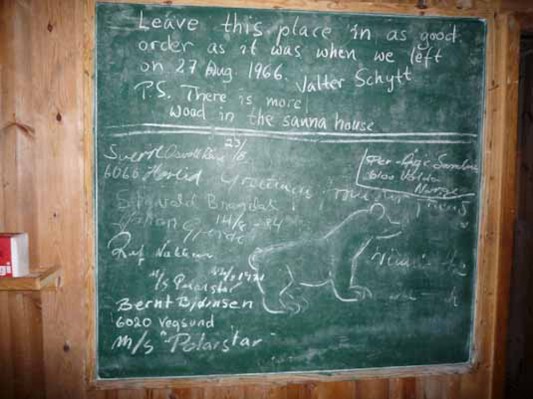