Muffin Island, 80⁰N. We’re so close to the magnetic north pole that compasses won’t work. This is a place of lost bearings, and it seems right somehow that all our qualities of movement are different here. Out in open water the Noorderlicht rolls and plunges and I’m struggling to adapt to four-dimensional journeys through the boat as it shifts chaotically in space and time. I can’t trust my legs; the floor drops and tilts and suddenly I’m walking drunkenly with my hands along the walls, grabbing at straws. It’s like being weightless and incredibly heavy at once – I feel as though my eyes are rolling in my head, like compasses in water. Head and heels lose contact, and it’s no wonder the stomach heaves along with everything else. Goodbye proprioception; goodbye last night’s dinner.

Actually the seasickness toll has been very low so far, and I’m too compelled by the magnitude of this movement to be nauseous. Out on deck the wind and sleet and the cold wave spatter clear the head. We’ve travelled north-east from yesterday’s anchorage in Magdalena Fjord, via a shallow, snow-swept bay where we saw our first polar bear in blue half-light. A mother and cub, picking their way along the rocky foreshore to where a dead fin whale lay just beneath the high water mark. The cub fossicked in the snow while the mother lowered herself into the water and disappeared in search of the unlooked-for meal. Soon she emerged with a strip of blubber which she carried along the rocks to eat. Then they set off across the high scree. She moved with care and precision, exactly retracing her own earlier path through compacted snow. We lost them in the fading light, but their presence meant we couldn’t go ashore there. All wildlife is protected in Svalbard, and the bears are avoided not only for our protection, but for their own. This is their kingdom: ‘Arctic’ comes from the Greek word for bear (so the Antarctic is simply defined by an absence of bears, which seems a bit penguinist to me). A bear that attacks a human will be shot. It’s a high price to pay for doing what comes naturally in hard times, and with around 2,500 bears on Svalbard, the responsibility falls to us to look out for and avoid them where possible. But still we long to see them, measure ourselves against them, spread our small hands inside their tracks in sand and snow…

So we sailed overnight to Muffin Island. It’s more of a pancake, really; a bleak low mound of black sand and stone, walrus and whale bone. We’re out of sight of the mainland, with nothing but sea and ice between us and the north pole. The beaches are strewn with stripped driftwood logs, bits of degraded plastic, coloured buoys, flotsam ice, and a Russian milk carton. What goes around comes around, but mostly comes here, on currents of wind and water, drawn irresistibly, magnetically, as we are, to the pole.

There are takers, though, for these frigid, snow-swept green seas, and suddenly three walruses push their heads high above the water to size us up as we stand cramped with cold on the shore. On land they’re clumsy and vulnerable, like us on the rolling boat. But at sea they’re utterly at home; their yellow tusks stabbing the waves, mouths open below cleft, whiskery lips, they rise and subside, curious, wary, weightless. Back on the boat, I feel as though I’m swimming through sky and spray and I can feel my body relaxing into this new fluid motion. Walrus lesson no. 1: go with the flow. 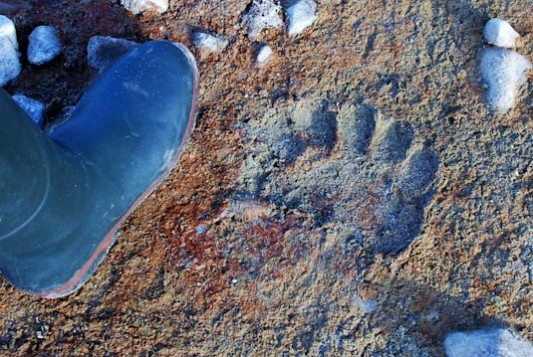 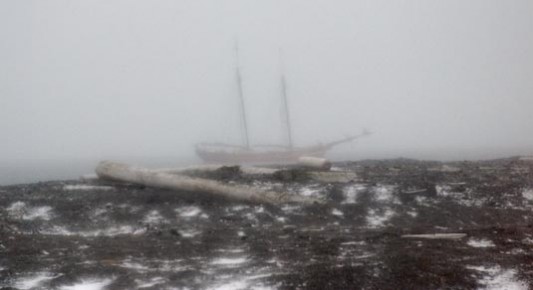 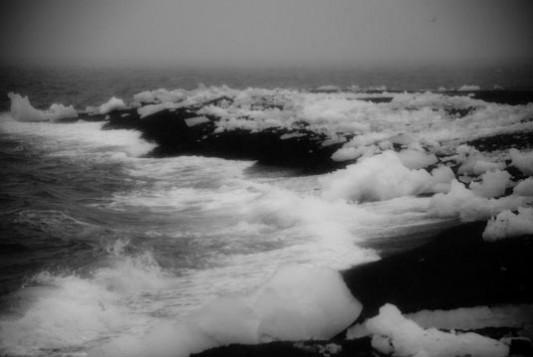 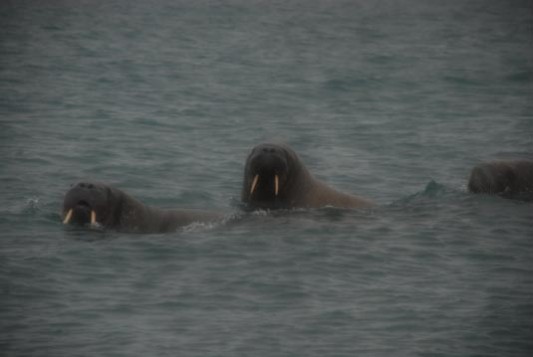