We’re making our third attempt to move south through Hinlopenfjorden to reach the ice domes on the east coast of Spitsbergen. There’s 20 minutes less sunlight every day as the polar winter approaches, so we’ve moved the clocks forward by an hour to make more daylight sailing possible. The drifting ice is too dangerous to grapple with in the dark, so we retreat to the calmer waters of ice-free bays for night-time anchorage. Yesterday, after encountering an ice barrier half-way along the fjord, we sailed north, retracing our earlier journey in Force 6 winds at 9.4 knots, faster than the engine can take us. It was absolutely exhilarating to stand on deck and lean against the 45 degree tilt of the boat as the sun rolled on its long, low-angled path below the horizon, flushing the sails, our faces, the wave-spray red and gold.

Two nights ago Russian artist Leonid Tishkov made his second ‘lunar landing’ at Sorgfjorden in the far north of Spitsbergen. For several years, he’s been travelling around the world with a private moon – an illuminated crescent five feet long – which he photographs, sometimes with himself alongside, in wild and urban landscapes. He had to cut it into 4 pieces to get it on the plane to Longyearbyen, and over the last week he’s carefully reassembled it with gaffa tape and screws. We laid it across our knees in the zodiac in the rising dark and travelled ashore. Leonid connected the battery and suddenly the boat, the bay, our huddled world, were alight and glowing, and when he placed it carefully in front of a bleached and broken explorer’s hut on a hill above the water, it took our breath away. It’s such a complete expression of human longing, of loneliness, comfort and hope in this most inhuman place, and its beautiful, impossible light against the blackness of the door and window of the abandoned hut were a strange and unlooked for blessing.

Cynthia Hopkins sat on a driftwood log and played a love song on the accordion, and at the end she turned her face to the moon and howled. We wondered if the arctic foxes were pricking up their ears in the snow above us, recognising something of themselves in that ancient sound.

Antlers, bones, bottles, bullet casings, rock spattered with brilliant orange lichen, fresh polar bear tracks in white channels of snow : these are the signs of life, death and time on these bare and beautiful shores. Now the dark spreads, and the cold, and Leonid takes his moon under his arm and walks back down to the water and the warmth of the boat. There’s no moon in the sky tonight, but we’ve had our fair share down here below. 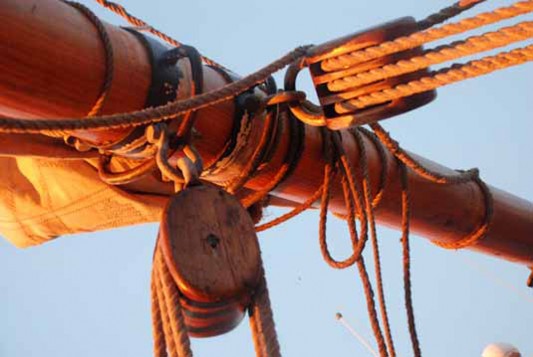 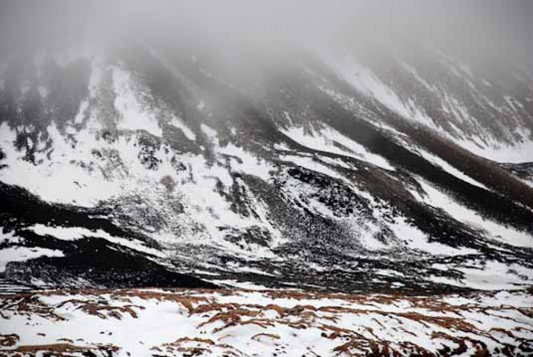 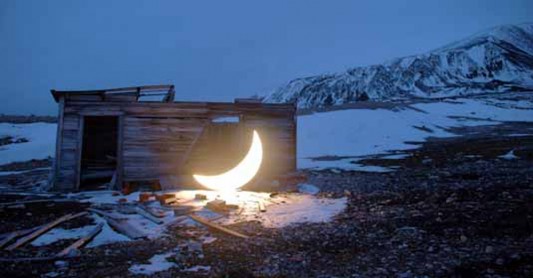