Yesterday we abandoned our third attempt to travel down the Hinlopen Fjord along the east coast of Spitsbergen. Each time we’ve sailed around the headland in calm seas to be met by near gale-force winds being funnelled up through the fjord, along with loose polar drift ice. There’s climate change, and then there’s weather, and their combination can be both unpredictable and ferocious. The last four years have seen the greatest melt of polar sea ice ever recorded, but the ice breaks up before it disappears, and strong north-easterly winds have blown a shattered, jumbled sea of it south around the island of Nordaustlandet and into the narrow channel of Hinlopen Fjord. We cant make headway through violent wind and sea, and have to turn back.

But every crisis, they say, is an opportunity, and our retreat to the west brings us into a beautiful, mountain and glacier-ringed fjord, where we’re shepherded into an icy bay by a flotilla of bearded seals, slapping the water in unison like a team of synchronised swimmers. There’s a boat in the bay; a 30 foot yacht slung with washing, and on the dark headland we can see two people and a dog. Our captain, Ted, knows who they are: Hauke – a former physics professor from Hamburg –  and his English partner Marie, overwintering here to study the role of snow in transferring CO₂ from water to atmosphere. Hauke’s been coming here for 10 years, since he spent his first winter alone in the bay, his boat frozen in sea ice, eating dog food and learning how to kill and dismember seals from a handwritten set of instructions provided by a hunter. A dinner invitation is duly dispatched, and a group of us sit on the bowsprit drinking gin and tonic with slabs of slightly salty sea ice, and watch them walk a mile along a narrow stony spit which is their only means of access to us now that the bay is almost frozen over. I think they’re as glad of new company as we are of the stories Hauke proceeds to tell after dinner and a few glasses of wine. They’re partly about his scientific research and his theory that life evolved in sea ice, but they’re mostly about polar bears and the hardship of arctic winters. They’re into the third month of a year-long sojourn, and as the bay freezes the tourist boats will stop coming, the night will descend for 6 months, and the bears will gather on the ice around the boat.

The prospect of months of darkness, extreme cold, aggressive bears and cramped living conditions isn’t everyone’s cup of tea, but for Hauke and Marie it’s the stuff of life itself, and according to Hauke, it activates ‘deep, deep knowledge’. They’ve got a carefully weighed out 12 month supply of food, including 120 kg of potatoes stored in the toilet, arctic salmon and trout fillets salted and dried, and Marie, it seems, makes wonderful pancakes and knits gigantic Nordic jumpers. But they’re not romantic about polar bears, though they’ve learned to get along beside them. A bear, says Hauke, ‘is not your friend. He has his own life.’ Bears are, though, incredibly curious. He’s watched them gazing for hours at unfamiliar phenomena like avalanches: ‘Sometimes the bears are like little scientists.’ Marie illustrates Hauke’s stark narratives (‘Once a polar bear climbed onto my boat. I fired a flare gun at him but the ammunition exploded in my face and I lost my sight and felt warm blood running down my cheeks and I thought, oh, that’s a bit of bad luck’) with enthusiastic bear and seal mimicry. They’re strong, eccentric, warm outliers, these two, and great entertainers. But what are those winters really like?

Outside, a full moon rides above scattered cloud in the last blue light, and the mountains are perfectly reflected in the unfrozen water at the far side of the bay. ‘As above’, wrote 16th century astronomer Tycho Brahe, ‘so below.’ On deck, we look up, look down, as our visitors walk home along the narrow spit between sea and sky, their tiny forms surrounded by this gigantic living context. We occupy such a thin film of life between sky and sea. Better to enrich than poison it; fill it with songs and stories and unexpected journeys and encounters. But I think I’ll give the dog food a miss. 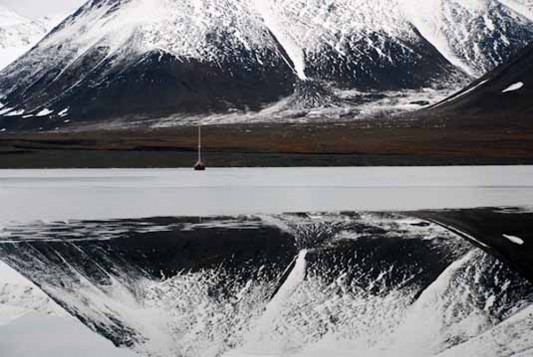 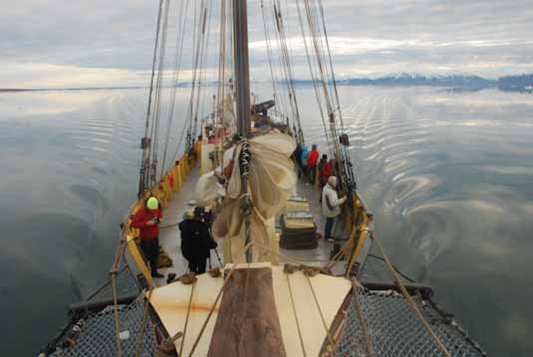 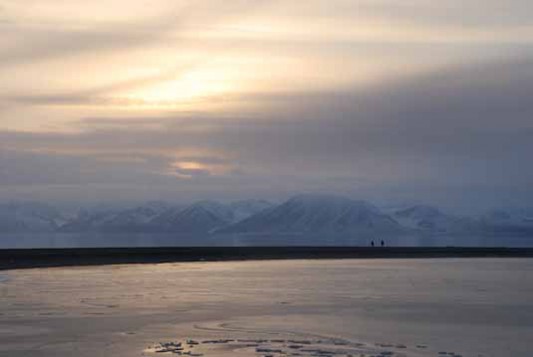